Regarding an article posted on a UK Blog – THERE ARE NO GOOD JAZZ GIGS, I would like to address some of the comments in this article:

1. The huge increase in the number of jazz festivals over the last decade as proof that it’s not nearly as bad as some people would have you believe. D C Dowell of www.apassion4jazz.net says that the number of jazz festivals has increased tenfold over the last decade and www.jazzfests.net has over 1,000 jazz festivals listed for Europe alone. MOST OF THESE SO-CALLED JAZZ FESTIVALS USE THE WORD “JAZZ” TO KEEP THE COST OF INSURANCE LOW. THEN, THEY BOOK ARTISTS THAT ARE NOT EVEN CLOSE TO BEING JAZZ ARTISTS – THEY ARE R&B, ROCK, REGGAE ARTISTS – BUT THE WORD JAZZ IS USED TO ATTRACT A MATURE AUDIENCE. IF THEY SAID IT IS A R&B OR ROCK FEST, THE INSURANCE WOULD BE SKY HIGH.

2. Much of the jazz musician’s malaise probably stems from his own experiences – playing an endless round of background music gigs where he is largely ignored or at conservative venues where he feels obliged to play standards in a mainstream style. These gigs often form the majority of his performing life and venues that actively promote jazz seem to be depressingly few in number. THE MAJOR PROBLEM IN THIS COUNTRY AND IN EUROPE IS THAT JAZZ IS A “HE/HIS” GENRE – A GOOD OLE BOY CLUB. WOMEN PAY 53% OF THE TAXES ON THE PLANET BUT WOMEN’S MUSIC REAPS ONLY 1-5% OF THE $27.5 BILLION IN THE MUSIC INDUSTRY AND FROM PUBLIC FUNDING. THIS IS A HUGE IMBALANCE. I SEE GREAT OPPORTUNITY IN THIS AS THE FOUNDER OF A NON-PROFIT THAT PROMOTES WOMEN MUSICIAN’S – www.wijsf.org

3. Going to jam sessions is the only ‘self-promotion’ that they do. They’re clinging to a hopelessly old-fashioned paradigm of the music business and are doomed to failure and frustration if they refuse to change. THE JAM SESSION IS WHAT HAS KILLED NOT ONLY THE JAZZ SCENE BUT THE MUSIC SCENE. OPEN MICS WITH HIP HOP AND RAP ARTISTS HAS MADE IT SO THAT ENTERTAINERS (I DO NOT CONSIDER HIP HOPPERS AND RAPPERS MUSICIANS) PERFORM FOR FREE. CLUB OWNERS HAVE GOTTEN USED TO THE PARADIGM THAT THEY DON’T HAVE TO PAY FOR ENTERTAINMENT BECAUSE OF THE DESPERATION AND EGO OF THESE AMATEURS WANTING TO GET UP ON A STAGE TO DISPLAY THEIR SO-CALLED TALENT, LEAVING PROFESSIONALLY TRAINED MUSICIANS OUT IN THE COLD. ORIGINALLY, JAM SESSIONS TOOK PLACE IN THE WEE HOURS OF THE MORNING, AT ONE OR TWO CLUBS, AFTER THE MUSICIANS GOT OFF FROM WORK. TODAY, THE JAM SESSION IS THE GIG, WITH THE BASSIST AND DRUMMER GETTING PAID (MAYBE) AND OTHER MUSICIANS AND VOCALISTS COMING UP ON STAGE TO DO A SONG OR TWO. IT’S PUT MOST MUSICIANS IN THE POVERTY CLASS.

On Friday, I had a conversation with the son of a well-known percussionist in Miami. This young man’s career path was toward financial planning. His aspiration was to be a doctor, although he’d spent his youth pursuing music with his father. He’d watched quietly, while his father struggled with the disparity of income suffered by so many musicians.

Tachaka told me that, after being successful in investment banking and other financial endeavors, he realized that, if he had to do it all over again, he would have been a musician.

What do you see as the value of being a musician?

See my book, SO, YU WANT TO BE A SINGER? A manual for up-and-coming Divas, Musicians and Composers. http://stores.lulu.com/divajc 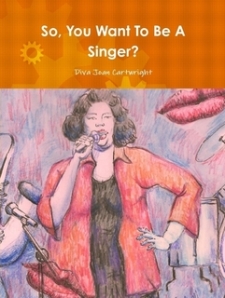 A manual for up-and-coming Divas, Musicians and Composers

What about women musicians?